Rumi Hara is an illustrator and comic artist living in New York City.  She creates colorful watercolor illustrations with quirky, playful characters for magazines and other publications. She frequently appears in comic arts events with her mini comics and zines for both young and adult readers. In 2015, Rumi received the Silver Medal from the Society of Illustrators in New York. 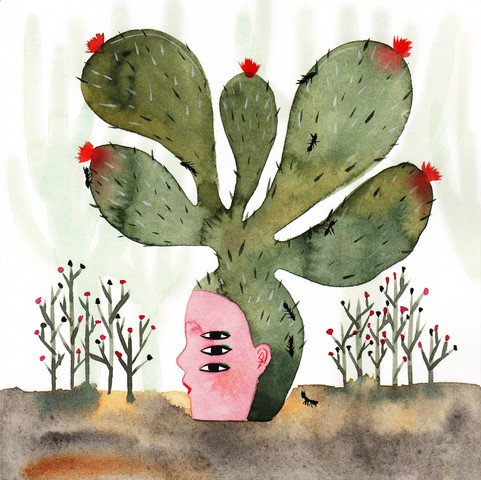 Rumi Hara, you were born in Kyoto, Japan, now you live in New York City. Any other exciting places you lived in between?

I was a translator before becoming an illustrator. While I was studying literature and translation, I had a chance to live in Grenoble, France for almost two years. Grenoble is a little town in Southeastern France surrounded by snow-capped mountains. That’s where I discovered all kinds of bread and cheese, pasta, and kebab. I also started drinking coffee. I don’t know what I would be eating now if I had never lived there. After working for a few years as a translator in Japan, I went to Savannah, USA to study illustration. Savannah is filled with trees and flowers and beautiful colonial buildings. You can drive to the beach in just 20 minutes or so and swim with dolphins (for real!) or go to a nearby swamp to watch an alligator snoozing in the sun. There is a seafood restaurant on the way back from the beach and the snow crab there is amazing, especially when you’re enjoying it with good friends.

When and how did you find out you wanted to become an illustrator?

I always liked to draw since I was little and when I was in sixth grade, I wrote in a class anthology that I want to become an illustrator (or a dog trainer) when I grew up. I loved making up stories and illustrating them. But then I forgot about that for a while. In 2009, I participated in a printmaking class with some colleagues. I made a six-panel comic for the class, and that was so much fun. I suddenly remembered my childhood dream and started taking illustration classes in Tokyo. I went to a school called Aoyamajuku, where I met many great friends and mentors. In 2012, I quit my job to move to Savannah, and in 2014, I came to NYC after graduating from Savannah College of Art and Design. I love dogs, but I’m glad it wasn’t a dog training class that I went to back in 2009.

So we know you love drawing and dogs. What else do you love?

I love walking. I walk a lot especially when I’m traveling or right after moving to a new place. It’s the best way to discover and understand what’s around you. It’s also a great way to think and come up with new ideas. I also love swimming, milk shakes and YouTube.

If you couldn’t be an illustrator, you’d be a…?

A marine biologist. I saw some scientists teaching dolphins how to play a game in a documentary and I wanted to be them.

Today, your portfolio features watercolor illustrations, hand-inked comics and photographs – of people, animals and everything in between. What were you drawing as a child?

I remember drawing a lot of people and animals. I also went through a phase of exclusively drawing Keroppi (a frog character from Sanrio) and his friends. There are actually a lot of different frogs in the Keroppi world.

What has been your favorite, most interesting, most peculiar or quaintest assignment so far?

I had the chance to make images for Ogilvy’s social media campaign in 2015. I was hired to illustrate quotes and interesting facts that came out of the Cannes Lions International Festival of Creativity. It is an annual, weeklong festival for advertising and related fields held in Cannes, France. While the festival was in session, I worked in a cool operation room with a wall covered with TV screens showing statistics and social media pages to make contents with some amazing people. They would often tell me to do “whatever you want,” and I was encouraged to experiment and try something new each time. It was such an inspiring, energizing week. I made watercolor illustrations, origami animations, and handmade books, sometimes wearing a GoPro camera on my forehead.

You’ve been published in America and Japan, and recognized by American Illustration and the Society of Illustrators. What’s next for you?

I would love to make a graphic novel. My comics are all short, around 20 pages or less so far. I like that short stories can express intense emotions and how it can be poetic and silly at the same time. But I want to try making a longer story with more developed characters and plots. I would also like to make a children’s book with watercolors.

Rumi sells a selection of drawings in her gallery on Photocircle. For news on her latest work and achievements, make sure to check out her website, too.