It’s that time of year again! The days are getting shorter, the autumn air is crisp, leaves are illuminating the streets in bright shades of red, yellow and orange – and tonight, monsters, ghosts, vampires and corpse brides are going to walk the streets in your home town, to scare the living hell out of you! Not a chance, of course, we would miss the opportunity to set the mood for this eerily beautiful event. So here’s our contribution to your Halloween – brought to you by Photocircle’s Web Designer, Carlo. Who, of course, is a photo fanatic, too, so naturally his tale evolves around photography – shocker (no, but: literally). 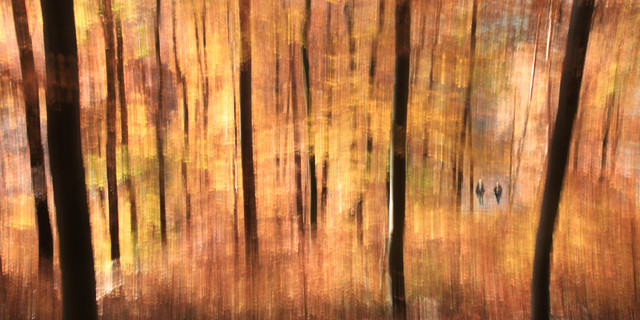 “I am in front of a concrete wall and there is a circle spray-painted on it. It’s almost six and the wind, gently breezing, makes me shiver. The grass rustles behind, an animal, maybe – probably just a gust. I keep staring at the circle and think something is wrong. It’s getting dark. I came here to take some pictures and my analogue camera doesn’t have a flash. I have to hurry.

I’m on a mountain, next to where I used to live about fifteen years ago. It’s not a real mountain, not even close, since it’s not higher than twenty meters, but we used to call it a mountain anyway. We called it “the” mountain, and if this were a book, it would’ve been “The Mountain”, with capital letters. We came here to play, surrounded by trees, in spite of what our parents said about the dangers.

I look around for something to photograph, but there are only trees and I’m awed by the circle. I’m thinking that it was me myself who drew it back then. We had this idea of spraying graffiti and one of my friends wanted to draw an earth. I did the round contour, he proceeded to fill it with colors, blue and green, and the result was awful. Someone else wrote words like “dog” and “pasta” – no one ever understood why, and we made fun of him. I notice now that these words are still there, next to the circle, but they are somehow distorted, like if you’re looking at them through water. And the circle – there’s no trace of colors anymore. Only the contour is left, red, bright and uncannily round. It’s getting colder, what I’m seeing looks impossible and I have an eerie feeling. I couldn’t have possibly drawn the circle like this and the thought of someone else taking the time to redraw it it’s somehow more unlikely and horrifying.

When I was ten, with my friends we decided to go on top of the mountain at night. For some reason, though, I didn’t go. I think I was sick. The day after they told me what happened, something no one could really make sense of. They went there with lights and snacks and just sat around chatting. At some point, in the distance, like it was hanging from a tree, someone saw what they described to be a white glowing sheet of paper, just bigger than any other they’ve ever seen. Later they would’ve referred to it as a T-shirt, which after a while started flying around, in circles. I didn’t really believe them, at first, but they were dead-serious about it. They told me they’d just left the place, wary rather than in a rush – running and screaming; worried of the possibility to disturb something. From what I remember, we never talked about it anymore. I wonder whether any of them would still remember the “night of the t-shirt”, but I never dared to ask. But it has been stuck in my mind since then. And probably it’s the main reason I came back that day.

I take a picture of the circle, thinking that I would make sense of it later and I’m ready to leave. Right after the shoot, I hear the noise again. I say to myself: it’s just the wind whistling through the grass, but this time I instinctively turn around. Nothing’s there, as I thought, but something in the trees is catching my attention. I’m sure it wasn’t there when I arrived. I get closer. It’s dark and I can’t see it clearly, but there is something like a hole, cutting through the tree branches and leaves, in a diameter of fifty centimeters, shrinking while reaching the opposite side. The noise, again, distant on my left, and now another one on top of that, a light tick repeated every few seconds. I don’t want to take my eyes off the hole. It’s almost like a tunnel, a cone, with branches instead for walls, and I figure out it points towards the circle on the opposite wall. The ticking sound is getting stronger – closer, possibly. I turn around. There’s a figure, slowly moving. I can’t do anything but stand still and watch as it’s coming closer. It’s a woman, an old woman, dropping small stones as she walks. I can hear myself breathing heavily. Two careful steps, a stone on the ground and my breath to fill the voids. She’s approaching me, yet looking beyond me, she doesn’t even seem to see me. My hands tremble and I’m paralyzed. I manage to take a step back but I’m on the edge of the slope of the mountain. I lose my balance and slide down, but I get to grab a solid tree root with my right hand. The same has happened to me as a child. Everyone agreed that I could have died, but somehow I managed to climb up by myself. Now, I look up and it’s so dark I can’t see anything. The noise suddenly becomes more rapid, and I expect to see the woman there, on top, at any instant. I’m scared, I close my eyes, and just let go.

I’m panting. No tree, no woman, no circle on the wall. It’s morning, it’s my room. I see my backpack and my camera equipment. I’m trembling and cold. Today I had planned to go to the mountain. I get up and wash my face. I was there, the night of the T-shirt, with all my friends. I prepare my breakfast. Turn on the TV. I’m taking my time. I know I was there with all of them and something happened. I don’t remember. I sit down, hear the sound of the coffee boiling in the background, but just keep staring at the wall. Something happened, I know, and I’m scared to go back.”